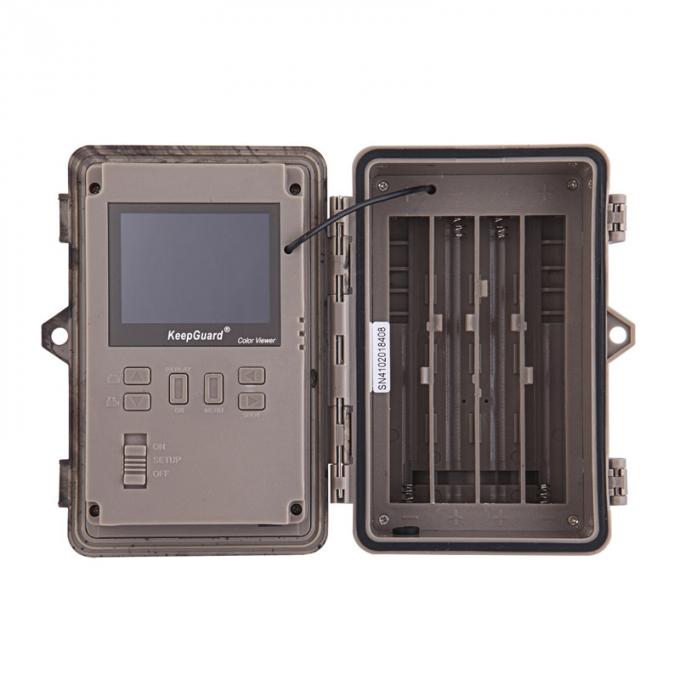 Detection Circuit
It remains a very long detection range(20m-25m).
The trigger speed is 0.3 seconds,which is one of the fastest trigger on the market.

The detection range is at least 60 ft in most cases.
Overall, this is an excellent detection circuit without a weakness. It can provide adequate coverage in any camera trap station you can think up.

About the KEEPGUARD CAM
The KeepGuard Cam is a digital scouting camera. It can be triggered by any movement of game in a location, detected by a highly sensitive Passive Infra-Red (PIR) motion sensor, and then take high quality pictures (up to 12MP still photos), or video clips. The KeepGuard Cam consumes very little power (less
than 200mA) in a stand by (surveillance) state. This means it can deliver up to six months stand-by operation
time when the device is powered by eight AA alkaline batteries, and up to twelve months utilizing lithium AA
batteries. Once motion in the monitored area is detected, the digital camera unit will be triggered at once (typically within one second) and then automatically take photos or videos according to previously programmed settings. The KeepGuard Cam is equipped with built-in infrare LEDs that function as a flash, so that it delivers clear photos or videos (in black & white) even in the dark, and it can take color photos or videos under sufficient daylight. The KeepGuard Cam is designed for outdoor use and is resistant against water and snow.

After opening the two latches on the right side of the KeepGuard Cam, you will see that the KeepGuard Cam has eight battery slots. Starting at the top of the battery compartment, slots 1, 2, 3 and 4 form one group, while slots 5, 6, 7 and 8 form the other group, each providing 6 volts in parallel. For maximum battery life, you should install a full set of eight batteries. The KeepGuard Cam may also be operated by just four batteries installed in the top group only (see right), starting at slot 1. Battery life will be shorter with 4 batteries, but the camera will operate normally. Whether you use 4 or 8, be sure to insert each battery with correct polarity (negative or "flat"end against the long spring of each battery slot). Keepguard recommends using eight new lithium AA (Energizer? brand) or alkaline AA batteries. NiMh Rechargeable batteries can also be used, but they might have a shorter life span due to their reduced
efficiency over time and at low temperature. It is also possible to use a lead-acid external battery cell with 6V output or suitable AC adapter-see below for more details. Using an External Power Source (optional, user provided) Optionally, you can connect an external 6V DC power source to the"DC In"jack at the bottom of the KeepGuard Cam. It is recommended to use a power source with a current output
greater than 1000mA. However, during bright daytime operation when no flash is required, the KeepGuard Cam can function with much less current (>400mA). Please use a compatible power source cable (not provided) to connect the external DC power source with the power input jack of the KeepGuard Cam, making sure that the polarity is correct. Note: The power connector is a 4.0x1.7mm coaxial DC power plug with positive”tip” (inside pin) polarity (Radio Shack P/274-1532 or equivalent). If both an external power source is connected and batteries are installed, the KeepGuard Cam will be powered by the external power source. When the batteries become weak, the low-battery indicator LED will glow blue, indicating the batteries should be changed.
Inserting the SD Card
The KeepGuard Cams have 32MB internal memory, which can hold only about 18 photos (12MP resolution). This is handy for testing and getting familiar with the camera, but you will no doubt
want to leave the camera unattended for longer than a day, so using an SD card is recommended. Insert the SD card (with the camera′s power switch in theOFF position) before beginning to operate the camera. Don′t insert or remove the SDcard when the power switch is in the ON position. The KeepGuard Cam uses a standard SD (Secure Digital) memory card to save photos (in .jpg format) and/or videos (in .asf format). SD and SDHC (High Capacity) cards up to a maximum 32GB capacity are supported. Before inserting the SD card into the card slot after opening the camera's front cover, please makesure that the write-protect switch on the side of he card is″off″ (NOT in the″Lock″position). Following describes how to insert and remove The SD card